AAR The Men Who Would be Kings Rules!

AAR The Men Who Would be Kings Rules!

I picked up Osprey’s The Men Who Would Be Kings rules after seeing good reviews for them online and we gave them ‘a run’!

We selected Scenario A in the Rules, ‘Just Passing By’ a skirmish/movement game and picked 24 point sides. The only chrome we used over the basic rules were the Leader Traits. Our game was based in East Africa in the late 19th Century with Dave playing the Imperial Germans while I controlled the forces of the British Empire! Our Leader’s traits varied from ‘A Jolly Good Chap’ (very nice) through Shirker (one on each side!) to ‘Hapless’ (Oh Dear!)

The game played quickly with both sides concentrating on exiting units initially. As soon as the forces came within range that became of secondary importance as we tested out the firing rules. One of the German's Native Units sensing a chance to overrun some Redcoats tried a charge but were cut to pieces for their trouble by another unit of Brits firing into their flank. After the set number of turns the game ended the Germans won a marginal victory!

Some pictures of the action! 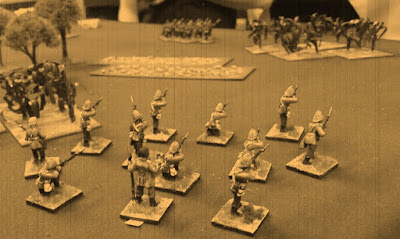 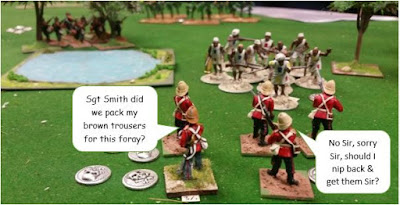 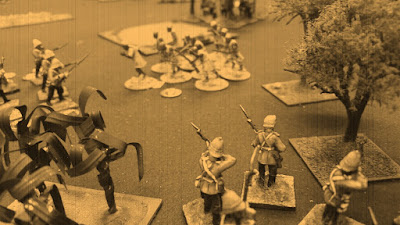 Return to “The Eureka Stockade To Breaker Morant Room”